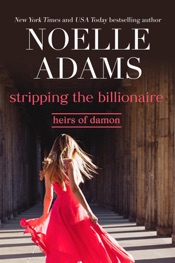 For the last eight months, Mandy has lived across the hall from a caveman.

He won't trim his beard, he mostly talks in grunts, and he'll hardly emerge from his cave of an apartment. Ben might be a grumpy mess, but she kind of likes him anyway. She's not attracted to him, of course. Not at all. Those stray feelings are merely a fluke. She's looking for a man who has it all together, and Ben isn't even close.

Benjamin Damon is heir to a billion-dollar corporate empire, but he has put his family and that whole lifestyle behind him. No one knows who he is now—not even his pretty princess of a neighbor who refuses to leave him alone.

When she ropes him into taking her with him to work on his mother's historic Savannah home, he knows it's a mistake. Mandy represents the world he's tried so hard to escape, and he can't let one woman strip him of the new man he's tried to become. The more he's with her, though, the more he wants her. Despite his best efforts, he's falling for her hard—and dreading the day she finds out all of his lies.