Publishers Weekly heralded this first book in Richard Bard's Brainrush thriller series as "terrifically entertaining" and "inventive and compelling." It went on to earn The Wall Street Journal's #1 Action/Adventure slot in their Guide to Self-Published Big Sellers.

Before he slid into the MRI machine, Jake Bronson was just an ordinary guy with terminal cancer. But when an earthquake hits during the procedure, Jake staggers from the wreckage a profoundly changed man, now endowed with uncanny mental abilities.

An ocean away, Luciano Battista wants a piece of Jake's talent. Posing as a pioneering scientist, the terrorist leader has been conducting cerebral-implant experiments in a sinister quest to create a breed of super jihadist agents...and Jake's altered brain may be the key to his success. But Jake refuses to play the pawn in an unholy war--and when an innocent woman and autistic child are taken hostage to force his cooperation, he embarks on a jihad of his own. Jake and his band of loyal friends are thrust into a deadly chase that leads from the canals of Venice through Monte Carlo and finally to an ancient cavern in the Hindu Kush mountains of Afghanistan--where Jake discovers that his newfound talents carry a hidden price that threatens the entire human race.

"A terrifically entertaining thriller with three finely executed set pieces strung together with nice characterization. Especially successful is Bronson, an amiable, low-key tough guy able to rescue his princess, survive brutality, and retain a sense of humor." – Publishers Weekly
“Coming out of something stronger is usually a good thing, but Jake Bronson quickly realizes some things are just as much blessings as they are curses. "Brainrush" follows Jake Bronson as he comes into new cognitive powers, but finds him targeted by both sides of the war on terror, as he embarks on a worldwide journey to save his daughter, and maybe humanity along the way. "Brainrush" is a fine and hard to put down thriller, recommended.” – Midwest Book Review

“A triumphant merger of James Bond and psychic facilities.” – Kirkus

"Brainrush explores the bonds of friendship while pushing the boundaries of science, creating a compelling, action-packed thriller with a climax that's a knock-out!" – CJ Lyons, New York Times Best-Selling Author of Kill Zone

"If this startling debut doesn't have you turning pages at breakneck speed, then you're not paying attention. Rich characters, crackling dialogue, and a climactic sequence that is stunning, enervating, and innovative all at once. Richard Bard is a voice to be reckoned with." – Rebecca Forster, USA Today Best-Selling Author of Hostile Witness 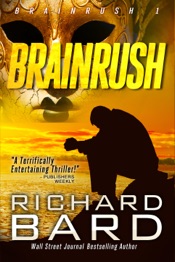 Comments
Free read eBooks online from Brainrush. Review Brainrush for free and without need to Registration. Read Brainrush PDF/e-Pub/kindle fire on your devices without any apps or contracts.